How I use this I/O card 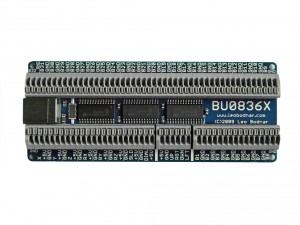 I currently own one of these ‘joystick controller’ cards, previously I owned three (before selling some of my Mk.1 cockpit earlier this year).

The nice thing about this I/O card over the BBI-32 of which I also use now instead of using a handful of these cards is that is has connections for potentiometers, this is perfect for using in my centre pedestal as gives me some axis connections for my flaps and spoiler levers.

So I use this input card inside my centre pedestal of which I have connected my flaps and spoiler levers to it as well as use the other spare 32 button inputs for things like the engine master switches, engine selector rotary switch and ECAM CP switches, ECAM brightness knobs, parking brake switch and spoilers arm switch.

Basically this card takes care of all my main centre pedestal switches and encoders (less the RMP, Transponder, MCDU panels of which will be purchased at a later date and probably have their own dedicated I/O).

Why I use this I/O card

This was the first input card that I purchased when I started building a home cockpit a couple of years ago, many people seem to use these and are really easy to use as they are plug and play and appear as a standard joystick in Microsoft Windows.

The card is relatively expensive compared to the other input card that Leo has recently released (the BBI-32) of  I have now started using when I when I just require the ability to control switches and encoders but it does have the support for a POV hat switch and also the axis potentiometers for my spoilers and flaps levers so that is the main reason(s) why I use one of these cards, if I had only had the need for switches and encoders I would have used a BBI-32 instead as they are cheaper (less than half the price) but as I needed to rely on the potentiometers I was more than happy to use this card.

Other people may also find that the solder-less connections are a huge plus point however I personally like soldering my wires to ensure they remain in place and make for a more permanent connection.

Where can you buy this from?

The BU0836X card can be purchased from Leo Bodnar’s site of whom personally designs, makes, sells and ships these cards from his workshop on the well known British racing circuit… Silverstone.

» Visit the Bu0836X product page for full details and to purchase.